Views expressed in this Amateur/Ham Radio News summary are those of the reporters and correspondents.

Please click link or scroll down to read your selections.

This week we finally saw the return of sunspots, over seven of the
last eight days, January 24-30. Average daily sunspot numbers rose
from 0 to 11.1, while average daily solar flux jumped from 71.2 to
72.9.

Geomagnetic activity forecast for the period January 31 to February
26, 2020 from F.K. Janda, OK1HH and the Czech Propagation Interest
group. OK1HH has been making these reports for 42 years, since
January, 1978.

Thanks to all who sent in this, a link to the highest resolution
images of the Sun ever recorded:

“A ‘great’ space weather super-storm large enough to cause
significant disruption to our electronic and networked systems
occurred on average once in every 25 years according to a new study.

“This Winter season has been very good one for morning DXing here in
Virginia on 160 Meters. In the past 2 weeks, I have worked 12
different stations in Japan on FT8 on the Topband. Running only 75
Watts, 8 of the 12 JA QSOs were made after my local sunrise, some as
late as 30 minutes past SR. Some JA stations were decoded more than
40 minutes after the Sun had risen. Many days with the K index at 0
or 1 is making for a very stable path through the magnetic north
polar region to the Orient.

“Activity on the higher bands have been made more interesting with a
number of maritime mobile stations now working the FT8 mode.
Stations traveling through many of the world’s water grids and
signing /MM at the end of their calls include DD6AJ, HA3FOK, R0LER,
UR7FM, UT1FG, UW5EJX and YU2AX.

“I’m looking forward to the Summer months, hoping for a good 6 Meter
DX season via E-skip and the SSSP mode.”

“Friday night, January 17th, there was some extraordinary
propagation on 80 M (CW) about 0530 UTC.  Europeans were very strong
here in the Midwest, well over S9 in some cases. I had just finished
working an Italian station and the next station that called him,
which had about an S6 signal was a ZL. I listened to the entire
exchange between the Italian station and the ZL. I have never heard
anything like that before on 80 M. Basically, 80 M was open with
good signals over the entire dark side of the planet. My antenna is
an 80 M dipole at 35 feet. This is my 5th sunspot cycle low and, in
fact, 80 and 160 are better at cycle lows. Clearly, the longer skip
zone when the band goes ‘long’ late at night, reduces the received
noise level on 80M.”

“I got into ham radio in 1959…been through several sunspot cycles,
as you can see. NO QUESTION 80 and 160 get better at the bottom of
the cycle. I am one of those twisted, sick people that actually LIKE
that!  Ha Ha! I like the low bands and I see it as a great
equalizer. I can’t put up a big antenna on the upper bands, but many
of the Big Guns can’t put up a big antenna on 80 and 160, so the
playing field gets leveled. I have (in terms of distance) worked
some really good DX on 80 and 160 this winter…with simple wire
antennas. You just gotta QSY with the sunspot cycle if you want to
have fun!”

“In the CW OPS mini test at 1900Z Saturday, the skip zones were very
long on 40 and 20, but 15 was wide open to southern CA. 15 has been
pretty quiet; FR4QT (peaking S7) on Reunion Island was ragchewing
with a Caribbean station (unreadable) at 1500Z Wednesday January 22.
I did get an answer from a French station who was weak one day
around 1445Z on 15.

Recently I (K7RA) decided to try FT8 with the very crude and limited
wire antenna I mentioned in ARLP051 at the recent end of last year.
This is a wire of no particular length (perhaps 30-40 feet total)
that winds around through laurel bushes in my back yard, about 4
feet above the ground, fastened to the branches with tie-wraps and
fed with an antenna tuner.

I knew FT8 was a powerful weak signal mode, but I was astonished at
the results on 80, 30 and 20 meters. Running low power, I was being
heard all over the world. Checking pskreporter.info I was surprised
to see a report from central Russia on 30 meters, and various Japan,
New Zealand and Brazilian stations, and of course coverage all over
North America. Even though I had very few 2-way QSOs (which are
minimal anyway in FT8) just seeing where my pipsqueak signal was
propagating was quite a revelation.

If you would like to make a comment or have a tip for our readers,
email the author at, k7ra@arrl.net.

An archive of past propagation bulletins is at
http://arrl.org/w1aw-bulletins-archive-propagation. More good
information and tutorials on propagation are at http://k9la.us/. 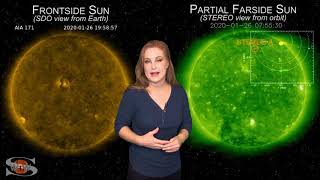